The advantages of a nearly perfect secondary mirror for a Newtonian telescope.

We need to imagine the light inside the telescope coming from a distant star. The light can be represented by a series of plane wave fronts moving toward the mirror. The separation between the planes is one wavelength. These planes move with the speed of light.

If we have a perfect telescope mirror then the reflected wave fronts coming off the mirror can be represented by a series of equally spaced, spherical waves that are spaced one wavelength apart. The center of curvature of the waves is at the focal point of the mirror. This focal point is where a star image would formed from light coming from all points on the perfect mirror. It can be examined there with an eyepiece or photo plate. Upon close inspection the image would form an Airy diffraction pattern

This characteristic diffraction pattern has a bright central spot surrounded by concentric rings. Due to the wave nature of light one always has this diffraction pattern for the star image. The degree to which this pattern spreads out depends upon the aperture of the telescope. There are many things that cause the Airy pattern to be non-ideal. That is, less than what mother nature will allow. Many of the physical effects which produce non-ideal images have been written about in the literature and I will only mention them below. (see http://www.pha.jhu.edu/~jlotz/aoptics/node2.html ) for a discussion of the Airy pattern.

There is the diffraction of the aperture of the mirror itself. This gives rise to the Airy pattern mentioned above. There is the diffraction of the incoming light by the secondary mirror. This transfers some of the energy that would be in the central spot of the diffraction pattern to the outer rings. The big issue is what are the physical effects that transfer intensity or energy into the outer rings of the diffraction pattern. There are thermal effects due to the mirror being at a temperature that is higher than the ambient air temperature. The differences in the local index of refraction with temperature can cause light to be refracted away from the ideal path so that more light is transferred to the outer rings. There are imperfections in the primary mirror itself that result in the reflected wave front to be much more complicated than the ideal set of incoming spherical waves that travel to the focus point. There are imperfections in the eyepiece and the eye, which will cause a degradation of the images to something that is non-ideal. The local atmospheric or "seeing conditions" can dramatically affect the image so that it is less than "ideal". In this regard, see Suiter's book on Star Testing.

But how do we examine this image in a Newtonian telescope? We need the secondary mirror so that the incoming ideal "spherical wave" can be transferred to the side of the tube allowing us to examine it in some manner without interfering with the light path to the mirror. This mirror is generally placed at an angle of 45 degrees from the axis of the telescope. Lets for sake of argument assume that we have a perfect mirror and that we have minimized or eliminated all the other effects that degrade the image from the ideal. 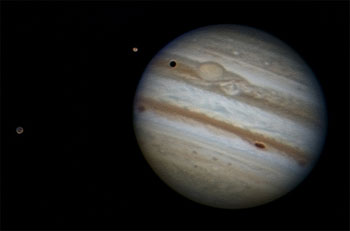 If we had a perfect secondary mirror, that is one that was mathematically flat and smooth and had a reflective coating with no imperfections, the incoming wave front would be reflected to the side and the near ideal diffraction pattern would get mapped onto a plane that is at the side of the tube. It would not be quite ideal because, as mentioned, putting an opaque object in middle of the light path to the primary would cause some degradation of the Airy pattern, putting more energy in the outer rings rather than the main central "spot". The literature is replete with examples and analyses of this effect. The one I personally like is by Edgar Everhart, since I knew him. He discovered several comets and was a well-known atomic physicist. See Astronomical Journal Vol. 64, No. 10, page 1059.

Now we are where the rubber hits the road. What if we don't have a perfect secondary mirror? What if, for sake of argument, we have an overall bulge in the secondary that is 1/8 wave high, but otherwise smooth. Now it is generally known (by this I mean in the amateur telescope makers/users community) that a 1/8 wave deformation from the "ideal" in a mirror surface translates into 1/4 wave deformation in the reflected wave front IF the light hits the surface at an angle of 90 degrees (normal) to the surface. First, for the secondary mirror we don't have the light incident at 90 degrees, rather it incident at 45 degrees. How does this affect the wave front? Well, unfortunately it makes matters worse by the factor of the square root of 2, which is 1.414.

Many interferograms that I have seen of secondary mirrors are of the type where there is a gradual variation in the surface, rather than lots of hills and valleys. Therefore, if we had a secondary mirror that had a 1/8 wave bulge that was high in the middle, our nearly ideal wave front traveling to the focus point now gets deformed by as much as 1/4 wave times 1.414, which is 0.354 of a wave. This is beyond the generally accepted ¼ wave front error needed for optimum image formation. This is for a perfect primary mirror. Things will generally get worse if the physical effects mentioned above are present, although one might get lucky and have the errors in the two mirrors just cancel each other, but I wouldn't count on it.

In the example given above the system would have tested out as having astigmatism. This very point is mentioned in passing, by Harold Suiter in his book "Star Testing Astronomical Telescopes" on page 156 (See last sentence on that page). Also in the same book see page 253, number 3 in the listings 14.2 Causes of astigmatism. Suiter mentions one of the causes and I quote, "A supposedly flat diagonal or right-angle prism that is actually slightly spherical (a surprisingly common problem)".

Many people spend much time and money in obtaining a mirror with exceptional wave front properties. Why would one risk degrading such a system with an inferior secondary mirror, particularly when an excellent one can be obtained at a reasonable price?